Three billionaires who launched PayPal and then went on to even greater success in their next ventures are now trying to make sure that artificial intelligence does more good than harm to humans. PayPal ringleaders Elon Musk, Peter Thiel and Reid Hoffman are joining forces with several other technology luminaries and companies to contribute $1 billion to finance a Silicon Valley research center that will dig deeper into the field of artificial intelligence, or "machine learning."

Quoting a Facebook mantra, COO Facebook Sheryl Sandberg said that gender and racial “inequities” are “everyone’s problem” in an Ask Me Anything-style forum on Quora.

She was answering a question about what men can do to create an environment where women can succeed in the tech industry. After citing an inspirational Facebook poster that reads “Nothing at Facebook Is Someone Else’s Problem,” she said, “The inequities that persist are everyone’s problem.”

“Gender inequality harms men and women, racism hurts whites and minorities, and equal opportunity benefits us all,” she added. She went on to offer these three pieces of advice:

Educate yourself and others about bias

Sandberg said that unconscious bias leads to a lot of inequity, noting that job applicants named John are always offered a higher salary than those named Jennifer, and job applicants with names considered “black” are often passed over in favor of their white counterparts. Fundamentally unconscious biases are categorizations our brains make in order to make sense of the world. In effect, it means drawing broad generalizations about certain names, skin colors, and genders so we don’t have to think about how an individual operates.

From VentureBeat
Ready to think outside the (ad) box? We’ve got the secret to successful F2P ad monetization and we’re ready to spill the details – for free. Sign up here.

The way to combat this, Sandberg said, is to suss out your own biases and confront them. She offered Facebook’s open video tutorials on unconscious bias as a starting point for anyone interested in educating themselves on the subject. Sandberg first unveiled Facebook’s unconscious bias training over the summer.

Start or join Lean In Computer Science and Engineering Circles

Two years ago the Anita Borg Institute teamed up with LeanIn.org and LinkedIn to create Lean In Circles, small discussion group meetings that help women explore their interest in technology and get feedback and mentorship from their peers. Today there are over 25,000 such groups in 180 countries around the world. The groups also serve as a sounding board for women who need help navigating the social politics of asking for a raise and highlighting their achievements in an appropriate way.

Sandberg advised men who want to take action to join or start a Lean In group in their area. Her hope is that men who care about achieving workplace equality can help create a community where women can be inspired and encouraged. She noted that while the groups are focused on helping women in tech, men are welcome to attend and give their support.

Finally, Sandberg made an obvious assertion that’s often overlooked: “We cannot get to an equal world without men leaning in at home.” Another big complaint from women is that despite working a full-time job, they are often saddled with the majority of housework and child rearing — a sentiment borne out by the Bureau of Labor Statistics earlier this year. Getting men to be equal partners in the home could certainly alleviate some pressure on women and make their time spent in the office more productive.

Sandberg also called on others in the industry to help parents by offering enough time off, nodding to the two months that Facebook CEO Mark Zuckerberg is taking to help with his newborn first daughter. Facebook offers a generous four-month leave package for all new parents.

To some, Sandberg’s recommendations might seem obvious. While the advice isn’t fresh, it needs repeating until women and minorities start seeing significant change in both employment opportunities and pay.

Companies pay supermarkets to showcase their products right at eye level; Mabaya wants to help online retailers to do the same.

The Tel Aviv startup announced today that it closed a $2.25 seed round to help “support the high demand” for its product. Israel’s Lool Ventures led the investment, and a handful of undisclosed angel investors also participated.

“It’s been done for many years in the physical world. Brands are paying retailers a lot to put the product in the visible part of the shelf,” Mabaya’s CEO, Avi Rabinovich, told VentureBeat. “If it works well in the real world, there’s no reason to not offer shelf placement on the online world.”

Mabaya’s technology is different from native advertising, Rabinovich said, because its algorithms make sure that the products shown are not only relevant to the user experience, but also related to what the user is looking for.

Mabaya has retail companies like Shop Direct and South America’s largest ecommerce site, Mercado Libre, in its portfolio. The company’s website also points to Samsung and Microsoft as clients.

Project Fi, which is Google’s way of jumping in the middle of the great carrier race, has shared today that starting tomorrow, you can order a SIM for your data-only device. I’ve switched one of my phones over to Fi and I really haven’t had a problem with finding reception and the way they bill you is refreshing. Here’s what the Google Fi team said today about the… Read More

It seems Apple is continuing to use the App Store’s “Top Charts” section to promote its own applications, by allowing apps like iMovie and those from its iWork suite to appear in the Top 10 Free apps on users’ iPhones. This gives the appearance that Apple’s own apps among the most popular and most-downloaded in the U.S. App Store – even more… Read More

Every single time I see something else pushing “Star Wars: The Force Awakens” I roll my eyes. And then I try something else where I think “OK, that was pretty smart.” Disney has teamed up with every brand known to man to promote the film, which premiered last night in Los Angeles. One of the partners Disney has gone deep down into the bag of tricks is Google. Today, a… Read More

Google today launched a new Chrome experiment called “Lightsaber Escape” in partnership with Disney, LucasFilm, and Industrial Light & Magic. The Star Wars “interactive web experience” starts off in a Star Destroyer, where Google says “you’ll need to use your phone as a lightsaber to escape the First Order.”

In March 2009, Google launched Chrome Experiments to show off what its browser can do. More specifically, the company asked programmers to push the limits of HTML5 and JavaScript to demonstrate what can be built on the Web. Earlier this year, Google announced it now had over 1,000 Chrome experiments, meaning about 200 new experiments are added every year. 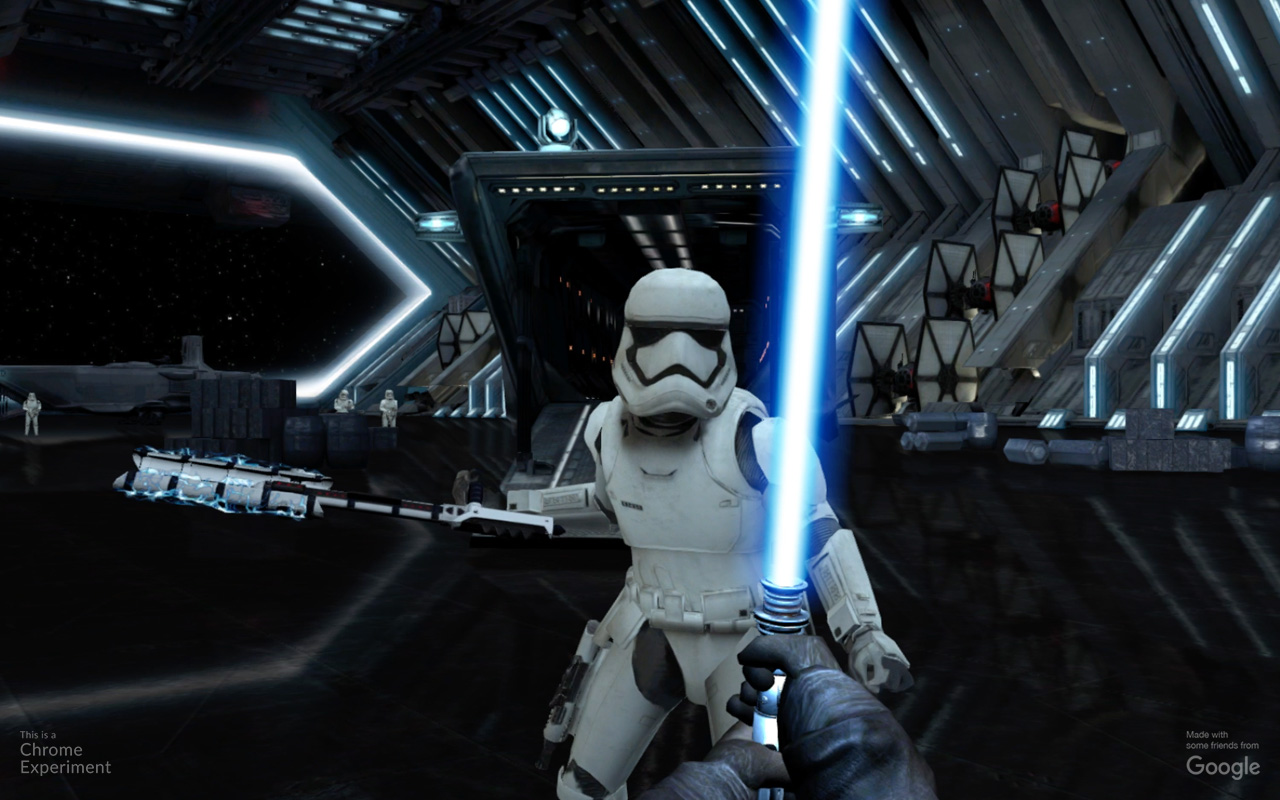 The Lightsaber Escape game is quite simple. You swing your phone around to control the lightsaber on your desktop or laptop with the goal of fighting storm troopers and other villains.

The game is considered a Chrome experiment because it was developed to work only in the browser. The 3D graphics were built with WebGL, the communication between your phone and computer occur over WebRTC and WebSockets (Google says this reduces latency and improves interactivity), and the rest use web standards that ensure the experiment works across browsers without plugins (though of course Google makes sure that experiments it builds work best in Chrome). 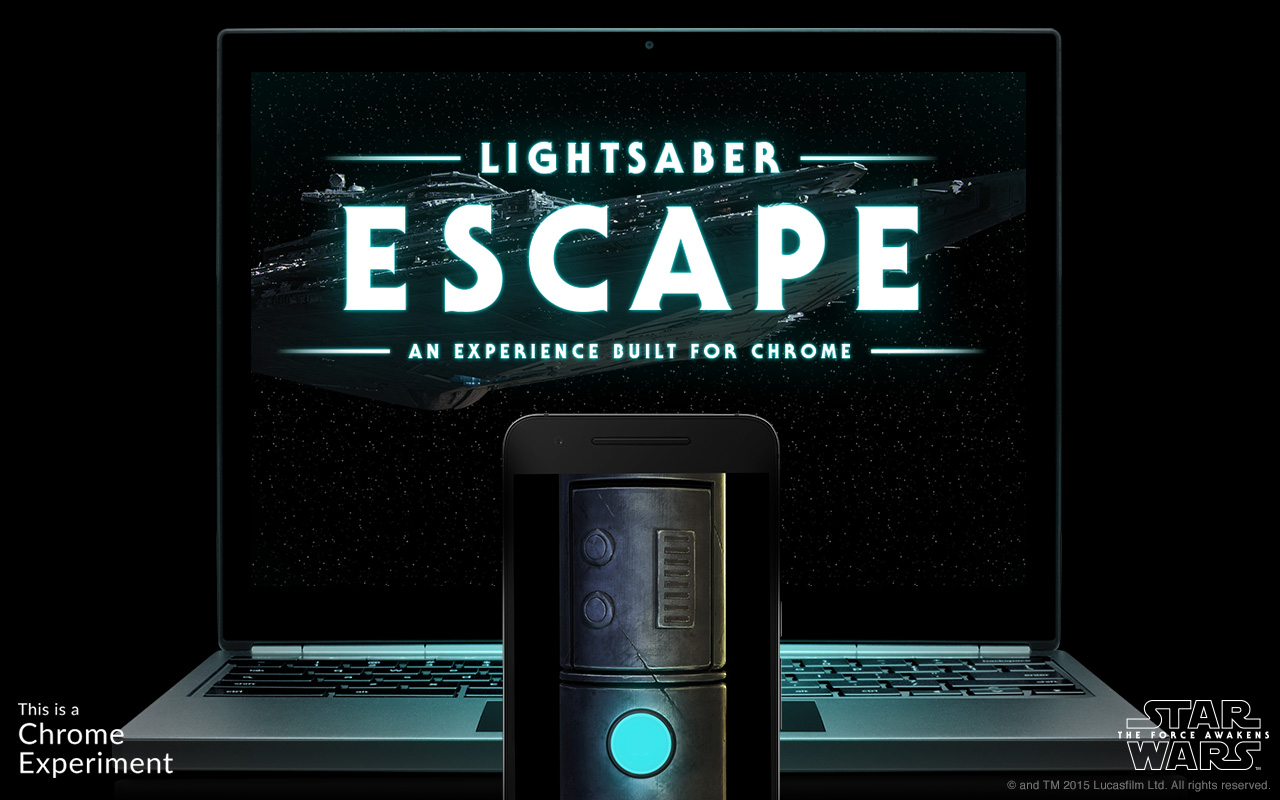 As you may have guessed, this experiment is “inspired by” the Star Wars: The Force Awakens movie debuting on December 18. Google has jumped on the Star Wars bandwagon more than any other tech company yet, with varying results.

Today’s Chrome experiment aside, Google has placed Star Wars features in Google Translate, Google apps (including Gmail, Google Maps, YouTube, Chrome), Google Cardboard, and of course Google search. With the movie coming out on Friday, Google has just a few days to squeeze in another Star Wars-themed promotion, but based on what we’ve seen with this game, the company should probably finish here and end on a high note.

About half of all American adults say that they play games. But only 10 percent identify themselves as “gamers,” according to a report by the Pew Research Center.

The survey digs into some of the perceptions that we have about video games as a pastime for nerdy young males. I suppose that makes sense, as video games become a bigger part of mass culture. After all, who identifies themselves as a “movier”?

From VentureBeat
Customers don’t just get irritated when you screw up cross-channel personalization. They jump ship. Find out how to save your bacon on this free research-based webinar with Insight’s Andrew Jones.

The survey also looked at perceptions about whether games portray women and minorities poorly, and if people believe that violent games promote aggressive behavior, and whether people believe that games encourage positive attributes such as problem-solving skills, communication, and teamwork.

The survey of a couple of thousand people, which was conducted in June and July of this year and was based on a random sample of English-speaking or Spanish-speaking phone users.

Verlocal is like an Airbnb for experiences, where locals can host lessons for travelers such as this DIY Ugly Sweater Workshop (other classes include “Don’t Worry, Be Yonce“).

Oddly, Airbnb already offers its own Experiences, although it has severely downplayed the idea so far.

With this new fund, Verlocal aims “to become the largest marketplace for experiences in the world,” challenging the similarly-branded Airbnb, plenty of related sites, plus niche marketplaces like the fitness-focused ClassPass.

With two lead investors operating in Asia — VenturesLab and Seven Seas Partners — Verlocal plans to expand to “China, Korea, and Japan … within six months.” But as of today, the one-year-old company operates in New York, San Francisco, and seven other U.S. cities.

Here’s a list of today’s tech funding stories, updated as the day unfolds. Tip us here if you have a deal to share.

ProSky gets a $2.3 million seed for its hiring tech

ProSky announced today that it raised a $2.3 million seed round led by Lightbank to further develop its product and invest in marketing.

The CEO also told VentureBeat that the company is looking into raising $20 million in its series A.

Kapor Capital, University Ventures, 500 Startups, and Learn Capital also participated in the round.

Vayyar, 3D-imagining sensor developer that says to make “it possible to see through objects,” took in a $22 million investment led by Walden Riverwood. Battery Ventures, Bessemer Venture Partners, and Israel Cleantech Ventures also participated in the round that brings Vayyar’s total funding to $34 million.

The startup developed a sensor that can scan through materials and liquids to create a 3D image of its content. Vayyar said that its technology can help the smart home industry by tracking a persons’ location and vital signs, however, it also has the potential to help cancer detention by detecting abnormal masses and tissues.

This list will be updated with breaking funding news all day. Check back for more.